Table of contents
Preface
Chapter 1: Shogunate local magistrates and village society
Chapter 2: Yonezawa Domain administrators and their control in Murayama County, Dewa Province
Chapter 3: Annual tribute payment system in the Dewa exclave of the Sakura Domain in the late pre-modern period
Chapter 4: Villages and mountains in the 19th century
Chapter 5: Introduction to research on the history of document management in Murayama County in the pre-modern and modern periods
Chapter 6: The formation of Yamagata Prefecture and political trends in local communities
Conclusion

This book mainly consists of six chapters that reveal the realities of administrative structures and regional management in Murayama County, Dewa Province (present-day Yamagata Prefecture) in the 18th and 19th centuries. In Murayama County, local history was actively studied before World War II, and since the 1950s, research on ancient documents has progressed dramatically, with the publication of many important essays on the history of pre-modern Japan. In addition to the editors, the authors Naoki Miyata, Hiroyuki Fujikata, Kazuo Takehara, and Hagemu Yamanouchi, all of whom are well versed in the study of the history of Dewa Province and Yamagata Prefecture, have revealed new historical facts through the results of their research on previously unknown historical materials, while referring to the considerable prior research. The chapters contribute to the discovery of new historical facts by focusing on subjects such as the system of control in the territories of the Shogunate and the Yonezawa and Sakura clans, specific consideration of lawsuits over mountains and forests, the history of document management in villages, and regional politics during the period of the Shogunate and the Meiji Restoration around the establishment of Yamagata Prefecture. These are up-to-date research results in the history of the Japanese archipelago. I urge everyone to read this book.(Kenichiro Aratake) 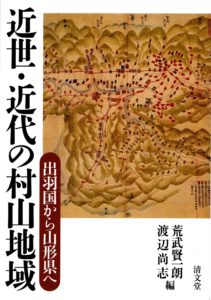