Table of Contents
Preface: Samurai Residences and Political Space in the Sendai Domain
Part 1
Chapter 1: Sendai castle ruins: Changes in land use in the Kawauchi District
Chapter 2: The Sendai Castle samurai residence district as seen from archaeological materials
Chapter 3: The Sendai Domain: Changes to and uses of samurai residences by the senior vassal class
Chapter 4: Samurai residences around Sendai Castle as viewed through laws and regulations
Chapter 5: Samurai lands around Sendai Castle in the Early Meiji Era
Part 2
Chapter 6: Communication and vassals in the Date Masamune Era
Chapter 7: Early Modern Period: Members of the Ninomaru-nakaoku in Sendai Castle and their treatment
Chapter 8: The role of Shukuro in the Sendai Domain
Chapter 9: Vassal trends in the “Gokasei-kata Case” of the Toyoma Date Clan
Chapter 10: The remains of the Kyunin vassals

The Sendai Domain was the daimyo family that owned the largest territory in the Tohoku region. This book focuses on the residences of the samurai, the ruling class of the time, within that domain and clarifies how they were actually used. The book is comprised of a total of ten papers in two parts, including the results of research into the political history of the Sendai territory. Part 1, “The Actual Use of Samurai Residences around Sendai Castle,” was the result of a new joint research project between literary historians and archaeologists. Part 2, “Political Space and Houses in the Sendai Domain,” carefully examines Edo period samurai “houses” and their members (daimyo, official posts, samurai, women, and house members) from the perspective of clarifying the mechanisms of rule. This book aims to provide the latest research on early modern Japanese history by focusing on the concept of “political space” and using samurai residences as a starting point to challenge new historical analyses. (Teiji Nomoto) 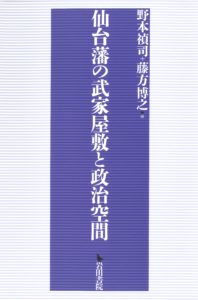