The use of case studies as a research design enables for a multi-faceted understanding of complex issues in real-life contexts. Specifically, geographic, place-based community research provides unique opportunities for both uncovering the breadth of experiences of various microcultures, and for giving rise to an ability to delve into specific topics in greater depth. One case in point is the on-going fieldwork taking place in the town of Shichigahama in Japan’s Miyagi Prefecture. This column outlines fieldwork undertaken over two decades in the town, and highlights the utility of using a mixed methods approach to research. In particular, as time passes, the fieldworker and informants alike have recognized the need for including a historical approach in the research.

Background to the Shichigahama case
Shichigahama is the smallest town (in area) in the entire Tōhoku region. Located in central Miyagi on the Pacific Coast, the town is found on a small peninsula bordering the Matsushima Bay. This is an area where both warm and cold water currents meet, as well as having an unusual mix of both rocky and sandy sea bottom, providing the resources for the town’s rich coastal fisheries tradition. Initial fieldwork in the town focused on the fisheries, and especially the way of life of nori (seaweed) harvestors. Though ethnographic in nature, the research also included the archeological history of the town, fishing cooperatives, and local events (such as the tsunami of the 1960 Chile earthquake). Early informants spoke of their years harvesting nori and provided unique details on life as fishers in the 1920s-1950s. More recent research focused on contemporary issues such as impacts of a warming ocean on harvests and life following the tsunami of the 2011 Great East Japan Earthquake (3.11). The newest topic involves the investigation of one microculture in the town, that of Takayama, a foreigner holiday retreat that was founded (1888) in the middle of the Meiji Period (1868-1912).

The Utility of Mixed Methods
Over the years, a variety of research methods have been employed in Shichigahama. Initially, most were the tried-and-true primary methods of anthropology, such as participant observation, qualitative interviewing, and surveys. Depending on the enquiry at hand, these were supplemented with other methods such as time allocation studies, visual mapping, oral history, and, of course, bibliographic materials. As time passed, it became apparent that significant knowledge was being lost, both in terms of oral and written sources, through the death of knowledgeable persons and the loss of documents and tangible heritage.

The Takayama Case
The Takayama area, officially named Takayama Gaikokujin Hishochi (高山外国人避暑地), is run by the Takayama Beach Company. The area was first visited by an American doctor while hunting in 1887. Following this, missionaries from nearby Sendai developed it as a summer resort. In these early years, visitors included professors, teachers, doctors, and especially in the inter-War years, embassy staff from many different countries. The nature of the group, as (most recently) primarily missionaries, meant that the temporary residents tended to limit their activities with the broader Shichigahama community.

Takayama today is made up of individuals and families, many with several generations of history staying in the area. As found with Shichigahama fishers, the death of older generations has led to a loss of institutional memory. Even when older missionaries remain alive, many have returned to their home countries, thus making interviewing them challenging. One of the younger, current members of the Takayama Beach Company became concerned about the loss of institutional knowledge, and approached an anthropologist working in the town about how to go about saving the remaining knowledge before it is too late. An archive was viewed as the best way to not only preserve knowledge, but also as a way to make the knowledge—which until now is often individual and within families—available to others. The current plan is to conduct oral history research with the elderly and current population, and also to digitize as much historical documentation as possible, putting these, along with audiovisual content into a digital archive. This includes not only the Takayama Beach Club documents, but also, significantly, the documents of the former superintendent of the Takayama grounds. This superintendent’s family served as liaison between Takayama and the Shichigahama Town Hall for three generations and continues to rent land to the group. Together with historians, the anthropologist and local Takayama community members are using mixed methods to ensure the history of this unique community are not lost to time.
（Alyne Delaney Center for Northeast Asian Studies） 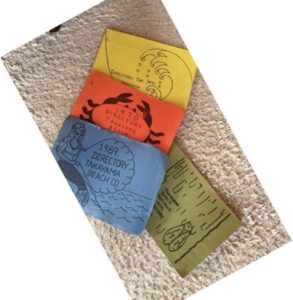 View of the Toyabe hill of Takayama, 2014. Source: A. Delaney